Expert Instruction in a Superb Environment

We provide award-winning and luxuriously personal education in creative technologies to motivated individuals and groups. 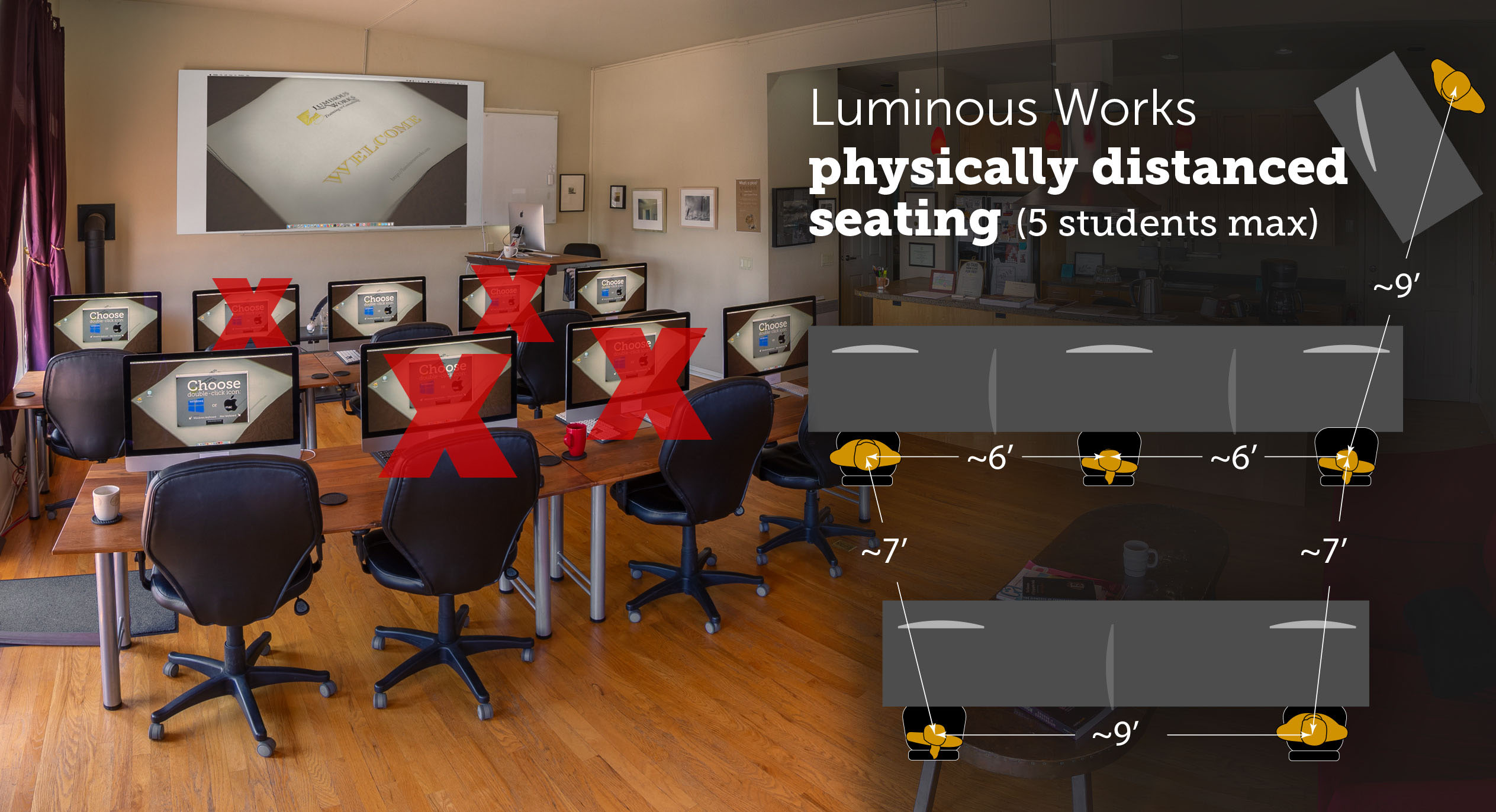 During your class, we hope you'll appreciate our computers with bright, sharp 5k monitors; your choice of a Windows-friendly or macOS setup at every seat; comfortable chairs; clear lines of sight to the projection screen; and the custom-made tables. You deserve a comfortable learning environment.

The Only Adobe Authorized Training Center in the region!

If you're looking for training from certified instructors and an authorized facility, you have to travel a bit to find someone besides us: east to the Great Lakes; across the Pacific to Australia, New Zealand, or China; or south to Sacramento.

View and/or download A map of our Curriculum [PDF].

The quality of your education is paramount. We solicit your feedback and value every word. We'd be honored to be your hosts for any of our training classes or workshops. 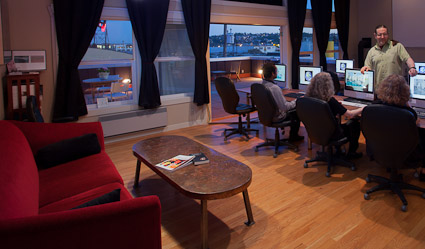 Carla Fraga and Steve Laskevitch, Luminous Works' founders, have been teaching photography, design, and software for many years as well as producing fine art photography, books, and more. Every day, we use the products and technologies we teach.

Steve Laskevitch is an Adobe Certified Instructor for Creative Cloud Design & Layout Solutions, including Photoshop, Illustrator, Lightroom, and InDesign. Luminous Works' founder fell in love with teaching and computer graphics in the 1980s while studying physics, education, and photography. He has spent the 21st century both teaching and doing desktop publishing, founding Luminous Works in 2003. Steve has built production workflows for many companies and helps Adobe prepare Certified Instructor exams. For four and a half years, Steve led the Seattle InDesign User Group. Now, he's Luminous Works' curriculum director and lead instructor, creator of the Course & Compendium series of books, and presenter to many industry groups. Over the years, he has taught at:
The Design Department of Cornish College of the Arts (where he was awarded the Excellence in Teaching Award); University of Washington Professional & Continuing Education (nominated for their Excellence in Teaching Award); and Seattle Central College.
Steve is obsessed with New Haven style pizza. Don't tell, but the best of that is to be had in Portland, Oregon: Apizza Scholls.

Carla Fraga (Adobe Certified Instructor in Photoshop), an educator for over two decades in analog and digital media, is Luminous Works' Provost. She is the recipient of the 2012-2013 Teaching Excellence Award for her work in the photography certificate program for University of Washington Professional & Continuing Education. Carla also served on the advisory board for their Advanced Digital Imaging. She has also taught at other institutions in the region including Seattle University. For eight years she assisted and curated over sixty photography exhibits at the FotoCircle Gallery in Seattle. Her BA in English from the University of Texas at Austin serves her endeavors as the author of The Last Strange Kings, a multibook fantasy series. The third book in the series published in 2020. She received her MFA in Photography from the San Francisco Art Institute.

Ben Goldsmith is a freelance video editor, motion graphic designer, and cinematographer. After receiving his BA at Hampshire College in a self-designed study focusing on digital media production, he worked at Monadnock Media, in Western Massachusetts. There, he developed and created immersive media experiences for historic and scientific museums nationwide, including the FDR Museum, and the Boston Museum of Science. Following that, he set his sights out west and schlepped over to Seattle, where he lives today. He currently has the privilege to manage and produce videos for Amazon, Alaska Airlines, Google, and other Seattle firms. When he’s not churning out the good stuff, you might find him at Seattle Bouldering Project, or brewing ales, or trekking through the woods with his puggle.

Peachy T. Peach is our mascot and inspiration to smile on difficult days. She likes to bake cookies, wear sparkly head adornments, and appear in Steve's Photoshop classes and books.

Nearby are both high-end and laid-back restaurants, vibrant pubs and taverns, all mixed in with the historic area's vital light manufacturing and fishing industries. Oh yes, and the growing list of shops and galleries means there's always something nearby to inspire. So if the traffic that awaits is not appealing, why not stay in the neighborhood and relax for a while?

Some Ballard eateries near us

For more info on our neighborhood: visitseattle.org. (or Wikipedia's entry on Ballard).

Contact us for our growing list of other hotels and B&Bs, most of which have been vetted by other students.